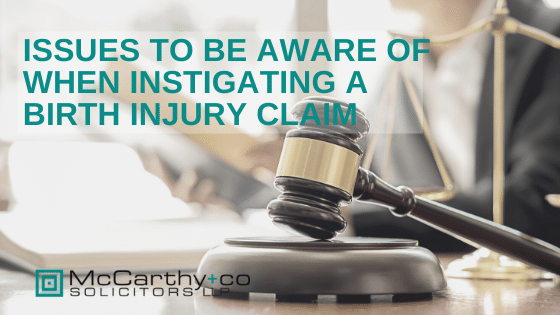 Am I always entitled to compensation if I suffered an infection after giving birth?

Most definitely not. Most of these cases, unless there is manifest negligence on the part of the hospital staff, will be defended. To what extent is determined by the circumstances of the case, but infections can arise even if excellent care is given, so you have to show some shortcoming or some foreseeable thing that could have been done or not done, and because it was or wasn’t done, this gave rise to the infection. In the absence of clear evidence to that effect, an infection in and of itself won’t entitle you to be compensated.

See our video guide on this topic – Am I always entitled to compensation if I suffered an infection after giving birth?

Are there time limits for making a birth injury compensation claim?

There are time limits and they’re very important, particularly for a mother who has suffered an injury. If you have suffered an injury, no matter how profound, unless you have actually brought proceedings in connection with that within two years of the date that you suffered the injury – or in some cases, if you only found out that the injury was as a result of negligence later on, then it’s two years from the date you found out – then no matter how strong your case is in liability, it will be statute-barred. So it’s a very, very tight timeframe and particularly when you’ve got a newborn, it’s the last thing on your mind and you yourself are trying to recover, so two years will seem like the twinkling of an eye. It’s a very unforgiving rule and if you don’t issue proceedings within two years of your date of knowledge (that’s the date that you suffered the injury or if there was some reason why you couldn’t have known, it’s the date that you found out that you did have a good cause of action) then your case is statute-barred.

The law is a little bit more forgiving with babies because they’re deemed to be under what’s known as ‘illegal disability’, so time doesn’t run against them under the statute of limitations until they reach the age of 18. So essentially, their two-year period only kicks off when they turn 18, so they have until their twentieth birthday effectively to issue proceedings.

Now, there is an inherent jurisdiction that the courts have to strike out proceedings that have been issued, even when they’re strictly speaking within the statute of limitations if it would be deemed to be unjust on the person defending the claim because they can no longer do so as a result of the fact that witnesses are dead or some other prejudice that they have suffered because somebody hasn’t actually pursued their case with the diligence that they should have. So while you can assume that you have 20 years from the date that the baby was born to bring a case, you shouldn’t sit on your hands, because if there’s any argument that the hospital or the doctor who’s defending themselves have been put in a completely unfair disadvantage because you didn’t actually pursue the investigations with appropriate haste, then you could find yourself up against it.

The other thing to be said is that if a child has suffered a brain injury or they have some difficulty whereby they don’t have proper cognitive function as a result of the injury they sustained, then the time really never starts to run against them because that’s another legal disability and if you don’t have mental function, then the statute of limitation will never be construed against you. But again, the inordinate jurisdiction of the courts to strike out cases where there would be injustice for allowing to proceed because it wasn’t diligently pursued always has to be borne in mind.

See our video guide on this topic – Are there time limits for making a birth injury compensation claim?

How do I prove fault in a birth injury claim?

It very much depends on what the alleged negligence is. First of all, you can’t even allege negligence or fault on the part of any medical practitioner until you have appropriate evidence from an expert in the field in question. What type of expert that would be will depend on the nature of the treatment which is under scrutiny. It might be that the nursing care wasn’t appropriate, in which case you’d get a report from an expert midwife; it may be the case that it was obstetrics, in which case you’d get an obstetrician/gynaecologist with consultant status to give a report having reviewed all of the medical records. Likewise, there may have been some shortcoming during the neonatal phase, so you’d need to speak to a neonatologist.

Generally speaking, you have to go to the UK for these experts because it’s a very small community here and understandably, they’re not anxious to start slinging mud at one another because of the interpersonal nature. So, even then if you have got your report from whatever expert has to show that there was a shortcoming, you then have to get reports on causation to show that the substandard treatment that has been highlighted actually gave rise to the injury that the baby or the mother has suffered. That might be a neuroradiologist who will review the imaging of the brain to see if that’s consistent with the injury which has been highlighted as a result of the substandard treatment, or it may be another expert such as a neurologist or someone of that nature. So, proving that there has been substandard treatment which resulted in harm can require several witnesses of different expertise, so each case is different in that regard.

See our video guide on this topic – How do I prove fault in a birth injury claim?

How much does it cost to bring a birth injury claim?

Well, it’s not a very satisfactory answer, but ‘how long is a piece of string’ is where we start. Depending on what the circumstances of the injury are, you will usually require two reports from experts who are usually based in the UK, and they will be at consultant level; very busy clinicians who are going to be expensive. You’d want to allow for a number of thousand euro as a kind of a war chest initially. The most important thing is to not allow that to prevent you from seeking advice from a solicitor in the first place because a lot of solicitors will review the circumstances of the case and will be willing to investigate whether or not there is a claim worth pursuing on a contingency basis – a ‘no win, no fee’ basis. They will generally be in a position to first of all work out what type of expert you need and second of all, what that will cost you, without actually incurring any cost on your behalf up to that point. If it transpires that you can afford it and it looks as if there’s a case that really needs to be investigated, then you can proceed.

The other thing to bear in mind is that while there might be a lot of reports required, the initial reports on liability will, in a lot of cases, determine for you whether or not those subsequent case reports are justified. So while the funding of the case, which could run for several years, might be very expensive (and you can look at ways of funding that through various means) the initial report on liability, in many cases, will tell you whether or not it is worth investing further money in the investigations.

Unfortunately, I’m not giving you a clear answer, but what I’m saying to you is if you think that you suffered a birth injury, get onto a solicitor who works in the area and they can work out what the initial investigation costs will be and then you can make an informed decision about whether or not you can afford it.

See our video guide on this topic – How much does it cost to bring a birth injury claim?

If you have any questions you would like answered or if you need advice around this topic, you can find out more here. Please don’t hesitate to get in touch if you would like to discuss further.

Post by John McCarthy
John McCarthy specialises in personal injury and medical negligence claims. His practice focuses on high-value compensation cases. John qualified as a solicitor in 2003 and holds a diploma in civil litigation. This specialist qualification in the area of personal injury and medical negligence litigation, is awarded by the Law Society of Ireland.
@https://twitter.com/ClonSolicitor
Previous Post Advice on Bringing a Birth Injury Compensation Claim
Next Post Changes to the Law of Easements and Rights of Way Acquired by Long Usage