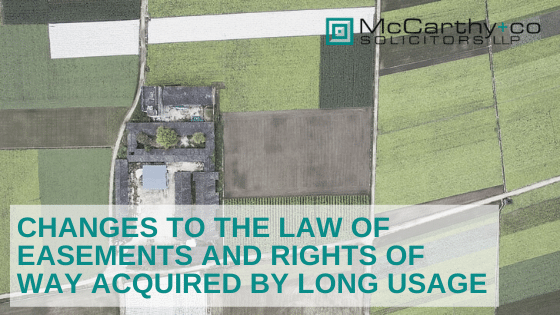 Why this may be relevant for property owners right now?

Owning a property involves a lot more than just having your name on the area of ground in question.

These rights of way and other similar rights are called easements.

Many easements are created by deeds when properties are built, bought, and sold and are registered on the title to the property.

However, many other easements, particularly in rural settings, are not based on deeds and registered, but are based on long usage, i.e. the rights have been used for many years into the past without issue and continue to be used on this basis.

Such rights by long usage are perfectly acceptable and legally binding, many properties depend on these rights for access and so forth.

In 2009 the law was changed, a new system for the creation of such rights over time was introduced and it was made a requirement that such rights be registered.

So what does this mean for you if you are a property owner?

The change to the law in 2009 reduced the period required to establish an easement by long usage from 20 years to 12.

So, if rights that your property benefited from in 2009 have continued to be exercised since that date without objection or interruption, it may well be the case that there is nothing that needs to be done immediately unless you have plans to sell or refinance the property in the short to medium term.

However, one of the problems with the change to the law in 2009 was that in introducing the new 12 year period it did not allow any older periods of usage arising before 2009 to be added.

Therefore, if the right had been used for over 20 years prior to 2009, this period could not be added in calculating how long the period has been exercised from 2009 in order to establish an easement under the new law.

In other words, you now need to have 12 unbroken years since 2009 in order to establish an easement under the new law.

So, say for instance, if the owner of the land over which the easement runs has objected to its use since 2009 or there has been any interruption of this usage since that time, then there may not be the 12 continuous years of usage necessary to establish the right under the new law before 1 December 2021.

Similarly, if the owner of the land over which the easement runs has lost mental capacity, for instance, if they suffered from Alzheimer’s disease, then the clock would have stopped running against them for the purposes of calculating time of usage of the easement since 2009 and it may not now be possible to have acquired the necessary period of usage before the December deadline.

In addition, there are particular issues when it comes to land owned by the State or land forming part of the foreshore, for which much longer periods of time were required to establish easements by long usage.

So, what do you need to do?

In many cases, you may not need to do anything immediately, for instance, if the rights have continued to be used uninterrupted without issue since 2009 and there are no issues with the mental capacity of the person who owns the land over which the rights run.

Indeed, it may well be that the current deadline of 1 December 2021 may be extended as a number of bodies, including the Law Society of Ireland, are recommending to the Government that this deadline should be put back while the complexity of the issues arising are analyzed in more detail.

Meanwhile, the following situations seem to us to be ones in which you may need to take action if the deadline of 1 December 2021 remains as currently proposed:

However, the situation is complex and all that we can do here is provide you with a very brief overview and summary.

If you have any concerns about whether this requires action in relation to your property, you should obtain legal advice relating to your specific circumstances as the correct approach will depend on the individual facts of each case.

Post by Flor McCarthy
Flor McCarthy is one of Ireland’s leading lawyers, certified by the Law Society of Ireland in Data Protection Practice. Flor has extensive expertise and hands-on practical experience in privacy, data protection and GDPR issues for marketers. He was chosen as Munster Solicitor of the Year at the Irish Law Awards in 2018.
@https://twitter.com/flormccarthy
Previous Post Issues to be Aware of When Instigating a Birth Injury Claim
Next Post When is Medical Negligence a Criminal Offence?