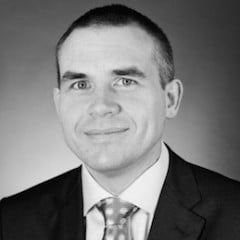 John specialises in personal injury and medical negligence claims. His practice focuses on high-value compensation cases. He has extensive experience in this area of litigation for over 10 years.

John has acted in a wide variety of personal injury, wrongful death, property damage, medical negligence, defective product, professional negligence and judicial review cases at Circuit Court, High Court, and Supreme Court level. He has experience of a large and diverse volume of Injuries Board claims, both as a preliminary step to litigation and a means of securing compensation in their own right.

John has a very busy practice and is currently acting for dozens of victims of the DePuy ASR hip replacement recall and has been instructed by over one hundred women affected by the PIP breast implant scandal.

John is the author of Make Your Claim: A Consumer’s Guide to the Injuries Board.  He has also written A Patient’s Guide to Bringing a Claim for Medical Negligence.

As well as having a master’s degree in physics and being a qualified solicitor since 2003, John holds a diploma in civil litigation, the specialist qualification in the area of personal injury and medical negligence litigation in Ireland awarded by the Law Society of Ireland.

John publishes and blogs in his areas of interest. He has had articles published in the Irish Law Society Gazette, the Sunday Business Post, the Irish Farmers’ Journal, Shelf Life and the Southern Star.

John is a sought-after contributor to the media for comment and analysis in his areas of expertise. In the Irish national press, he has been interviewed by the Irish Times and the Irish Sunday Independent and has contributed to the Irish Examiner. On TV, he has appeared on RTE’s Prime Time and TV3. On radio, he has been interviewed on RTE’s Liveline with Joe Duffy, on Today FM with Anton Savage, on C103 with Patricia Messenger and on Cork’s 96FM with Neil Prendeville.

When not practising law, John is usually found outdoors. He is an avid beekeeper and enjoys country life generally. He’s a bit of a springer spaniel nut.