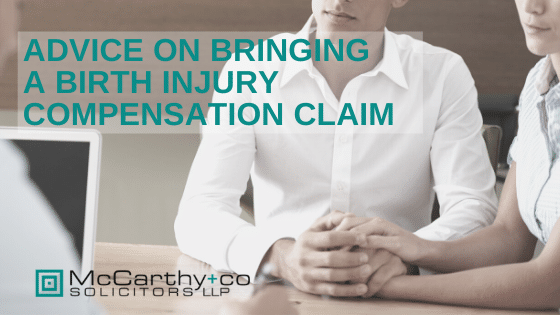 If you or your child has been injured as a result of mistakes by medical staff you may be entitled to make a birth injury claim. In this article, we provide information about bringing a birth injury compensation claim.

In what sort of scenarios can I claim compensation for my child?

Getting back to basics, this is a fault-based system and you have to show that firstly, there was a duty of care owed to the baby and that’s kind of a given, but it’s the bedrock of the working on whether or not there is a case. Secondly, you must show that there was a breach in that duty. There’s a test that was done by the Supreme Court in association with the National Maternity Hospital, which sets out the bar that has to be reached to show that there was a failure in the ordinary standard of care that’s owed to the mother and the baby. If you can satisfy a court, based on expert evidence that there has been a breach of that duty and that harm has flowed from that breach, then you’re entitled to be compensated – if you’ve ticked all those boxes. It can be difficult to do, because showing liability for breach of duty in and of itself may be contentious. You might have one expert saying one thing and another having a completely different view, but even if you can show that there has been fault or some shortcoming, it is then up to you to show that that shortcoming has actually caused direct harm to either the mother or the baby. There may be instances where there has been a clear breach of duty of some kind, but there is a difficulty in showing that the breach of duty, in and of itself, gave rise to the harm

Obviously, babies are born with complications every day, where there’s nobody to blame and even if there has been some form of substandard treatment given to them, you still have to show that the harm that the baby is suffering from was directly as a result of that breach, as opposed to just a misfortunate event with nobody to blame.

See our video guide on this topic – In what sort of scenarios can I claim compensation for my child?

In what sort of scenarios can I claim compensation as a mother?

A mother can have a number of different scenarios in which she can claim compensation, but the umbrella answer is that she has to have suffered an injury of some kind as a consequence of the process. It could be that she has suffered an anatomical injury herself, which is quite typical in vaginal birth, for instance when there’s a tear and the extent of that tear and the way in which it’s managed afterwards can give a cause of action. Alternatively, she may have suffered psychological injuries where she hasn’t actually suffered any physical injury, but if her baby has been harmed by the substandard treatment that baby has received, and if the mother, as a consequence of seeing this, suffers from some psychological injury, then she’d be entitled to be compensated for that. So, there are a number of different scenarios under which a mother will be entitled to be compensated for personal injuries – whether they be physical or psychological – arising out of the birthing process.

See our video guide on this topic – In what sort of scenarios can I claim compensation as a mother?

Can I bring a claim for compensation as a mother, as well as for my child?

Well, the answer to that is yes, on two fronts. First of all, it may well be the case that the mother is injured and the baby is perfect. Secondly, the mother can be injured herself and the baby can be injured or thirdly, the baby can be injured and the mother can be physically perfect, but she can have observed a terrible thing happening to her loved one and she may have sustained a psychological injury as a consequence of that. In any of those three scenarios, if the mother has suffered either a physical or psychological injury, then she’s entitled to be compensated. It may well be the case that the baby has a cause of action against the hospital in its own right also, but the fact that the baby is perfect doesn’t mean that a mother doesn’t have the entitlement to be compensated if she’s injured under any one of those three categories.

See our video guide on this topic – Can I bring a claim for compensation as a mother, as well as for my child?

Can I claim compensation for PTSD caused by birth trauma?

Yes is the short answer, again presuming that the birth trauma was as a result of substandard care, because you will certainly have situations where there’s a trauma but there has been no shortcoming on the part of the medical staff who are providing the care that’s needed. If it’s the case that either the mother or the baby in the course of the delivery process has suffered an injury, whether physical or psychological in the mother’s case, then if PTSD flows from that, certainly there is an entitlement to be compensated. Even if the mother suffers no physical injuries but if she witnesses her baby suffering a significant injury, then there’s the principle of what’s known as ‘nervous shock’, whereby if a loved one is seen to suffer serious injury, and the person who witnesses that suffers from a psychological injury, they are entitled to be compensated if there has been substandard care and that gave rise to the injury of the loved one. So, if PTSD has been caused, either by a mother’s experience of her own injuries or her witnessing injuries caused to her baby, she will be entitled to seek cover for PTSD or for any other recognised psychiatric injury which flows from that.

See our video guide on this topic – Can I claim compensation for PTSD caused by birth trauma?

If you have any questions you would like answered or if you need advice around this topic, you can find out more here. Please don’t hesitate to get in touch if you would like to discuss further.

Post by John McCarthy
John McCarthy specialises in personal injury and medical negligence claims. His practice focuses on high-value compensation cases. John qualified as a solicitor in 2003 and holds a diploma in civil litigation. This specialist qualification in the area of personal injury and medical negligence litigation, is awarded by the Law Society of Ireland.
@https://twitter.com/ClonSolicitor
Previous Post Stay Safe – Online and Offline
Next Post Issues to be Aware of When Instigating a Birth Injury Claim