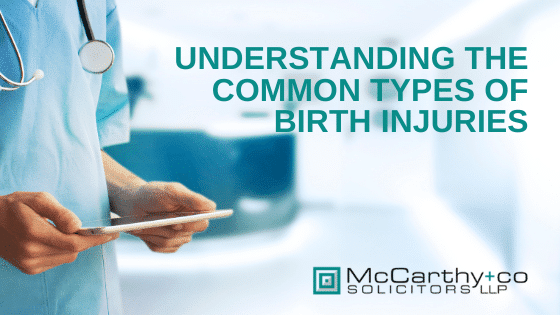 Having a child is an occasion of great celebration and joy and for the majority, this is the case. In some instances, however, where perhaps there was some medical fault, it can result in injury to the child or mother causing great distress to a family. In this article, we aim to answer some of the questions around birth injury and the most common types of birth injuries.

What are the most common types of birth injuries?

A good first question and before I start, I should emphasise that I have three young children myself and I can remember vividly the delivery of each of them. I especially remember that feeling of dread and panic in that short window when you just don’t know if everything is going according to plan. Thankfully, they’re all healthy and that’s the case with the vast majority of children. It’s undoubtedly a very worrying time, but in the majority of cases, even when there is an injury, the injury can be quite modest and there can be a full recovery.

Unfortunately today, because of the nature of the topic we’re dealing with, we will be discussing issues where there is a lifelong change as a result of some complication in labour and delivery. That’s when you have cases that have been brought against hospitals, obstetricians and other medical professionals.

As I say, the vast majority of deliveries are without incident but you do have injuries. Thankfully though, the more common the injury, the least problematic they are. For instance, you might have an injury where your baby might have their clavicle – or their collarbone – fractured during delivery, but in the vast majority of these cases, there’s nothing that needs to be done except to give a little bit of TLC and make sure that their pain during the healing process is managed. You might also have marks or bruising left by forceps or by vacuums and in the majority of these cases, it’s very distressing at the time, but it soon gets forgotten about in the whirlwind that follows.

The ones that hit the newspapers are cases where babies have life-altering injuries such as cerebral palsy where, unfortunately, they will never lead a full life because of their injury. The extent of their injuries is dependent on the individual case, as there’s a spectrum; some have mild symptoms while others can have profound symptoms. You’d be forgiven for thinking that these happen on a daily basis because they’re in the newspapers, but the reason they’re in the newspapers is because infant cases have to be ruled before a judge and the media take an interest in them because of the amount of money involved and also because of the human interest angle, where you have a baby who’s injured in childbirth and that is inherently tragic. So, even though they’re in the news a lot, they’re quite infrequent. We don’t really know how many per annum go through the courts as there’s no register, but we suspect it’s probably in the tens rather than the hundreds. So as I say, thankfully, this is a relatively rare occurrence, but of course, when it happens to the people concerned, it doesn’t matter how often it happens – what matters is that it has happened.

See our video guide to this topic – What are the most common types of birth injuries?

Which types of birth injuries cause cerebral palsy?

Cerebral palsy is a very broad term, which refers to a number of neurological injuries and they can be caused by different events during the pregnancy. They can be caused by an infection during the term; they can be formed as a result of a lack of oxygen during the delivery process, or they can be acquired after birth as a result of the baby contracting meningitis or some other illness. It’s basically how the events that gave rise to the cerebral palsy were managed determines whether or not there might be a cause of action.

They reckon that one in five of babies who have cerebral palsy sustained it as a consequence of the delivery process itself, so there are a lot of other babies out there where they don’t know what caused cerebral palsy and it certainly wasn’t as a result of the intrapartum care that they received. For this reason, cerebral palsy cases are often fought very vigorously by the hospitals, because there is a potent argument that even if the child does have cerebral palsy and if there were complications in birth, that’s not to say that that was the cause of the cerebral palsy.

See our video guide to this topic – Which types of birth injuries cause cerebral palsy?

What types of experiences are considered to be birth traumas?

The broader definition encompasses all injuries that can occur in the antenatal period, whether due to infection or failure to monitor some condition that the mother has, and it follows through into intrapartum – the delivery phase – and then into the postnatal phase or the neonatal phase. You could have injuries in all of these three timespans and that’s known as birth injury. There is no precise definition for birth trauma, but it’s a more specific term and it’s usually an injury caused by some mechanical episode in the course of delivery, whether it’s overenthusiastic use of forceps or having to yank a child out because they’re trapped in the birth canal. So, trauma is more to do with mechanical injuries in the actual delivery process itself.

See our video guide to this topic – What types of experiences are considered to be birth traumas?

What is the difference between birth injuries and birth traumas?

There’s no specific definition of either of them and I’d imagine there’s probably a different definition for the medical world and the legal world. In layman’s terms, birth injury covers the entire spectrum where there could be an injury sustained, from the antenatal period, perhaps because of an infection the mother has that the child picks up for instance, or because of preeclampsia or diabetes that hasn’t been monitored properly, into the intrapartum phase, which is the labour and delivery. It also covers the neonatal phase, so there could be an injury sustained by either the mother or the child at any time in those three periods. Birth trauma is usually more specific to a mechanical injury, which is sustained in the course of the delivery, whether that’s by use of forceps, by a vacuum or by an obstetrician having to physically pull a baby out because of the way they’re stuck in the birth canal. Likewise, if there’s any injury to the mother’s anatomy because of the forced nature of the delivery, that will be perceived as a birth trauma, which is a kind of a subgroup of birth injury.

See our video guide to this topic – What is the difference between birth injuries and birth traumas?

Post by John McCarthy
John McCarthy specialises in personal injury and medical negligence claims. His practice focuses on high-value compensation cases. John qualified as a solicitor in 2003 and holds a diploma in civil litigation. This specialist qualification in the area of personal injury and medical negligence litigation, is awarded by the Law Society of Ireland.
@https://twitter.com/ClonSolicitor
Previous Post Help To Buy Scheme – What You Need To Know
Next Post Stay Safe – Online and Offline