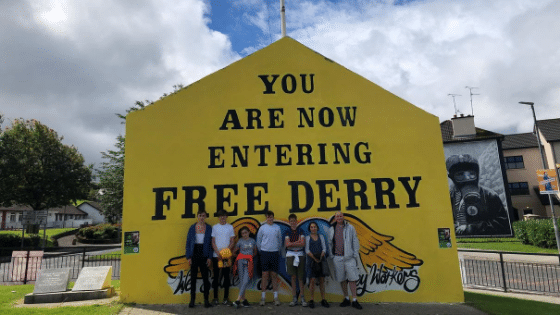 We were on staycation recently and visited family in North East Antrim and Donegal. (I know, I know, strictly speaking staycation means you don’t leave your home, but that’s what everyone’s calling it this year in the weird world that the pandemic has dropped us into, so the pedants will just have to suck it up.)

In between we spent a couple of nights in Derry, you can see us in the attached image at Free Derry Corner.

In the background to that photo is a piece of a mural featuring a boy in a gas mask. The boy was Paddy Coyle and as it happened he died the week that we were in Derry in July. He was 13 at the time the photo that the mural is based on was taken in 1969.

Of course, since we came home from Derry we have seen the sad passing of another iconic Derry figure, the great Irish leader, John Hume, who was buried this week. I thought that I couldn’t let the week pass without mentioning it.

Hume was an immense figure, something that was particularly highlighted by the humility of his funeral arrangements this week in the context of the pandemic. It has been said by many, but in terms of Irish history, I believe he will be seen to rank with O’Connell and Parnell.

John Hume was a man of peace and peace has been central to his legacy. But while he was devoted to non-violence, what drove him into action was injustice.

We are lucky to live in peace and to have ready access to justice. We should take neither for granted.

To visit Derry and learn about the social, economic and political injustice of that time is a journey well worth making.

If you’re looking for somewhere to go that doesn’t involve foreign travel this year; you could do a lot worse than Derry. Apart from the compelling history it’s probably one of the friendliest places I’ve ever been; the people really are splendid! We stayed in the Shipquay Hotel which is inside the historic walls of Derry.

If you do go there I can’t recommend Gleann Doherty’s Derry Guided Tours highly enough.

Post by Flor McCarthy
Flor McCarthy is one of Ireland’s leading lawyers, certified by the Law Society of Ireland in Data Protection Practice. Flor has extensive expertise and hands-on practical experience in privacy, data protection and GDPR issues for marketers. He was chosen as Munster Solicitor of the Year at the Irish Law Awards in 2018.
@https://twitter.com/flormccarthy
Previous Post Statements of Truth In Personal Injury and Medical Negligence Claims
Next Post The “Help to Buy Scheme’ Explained