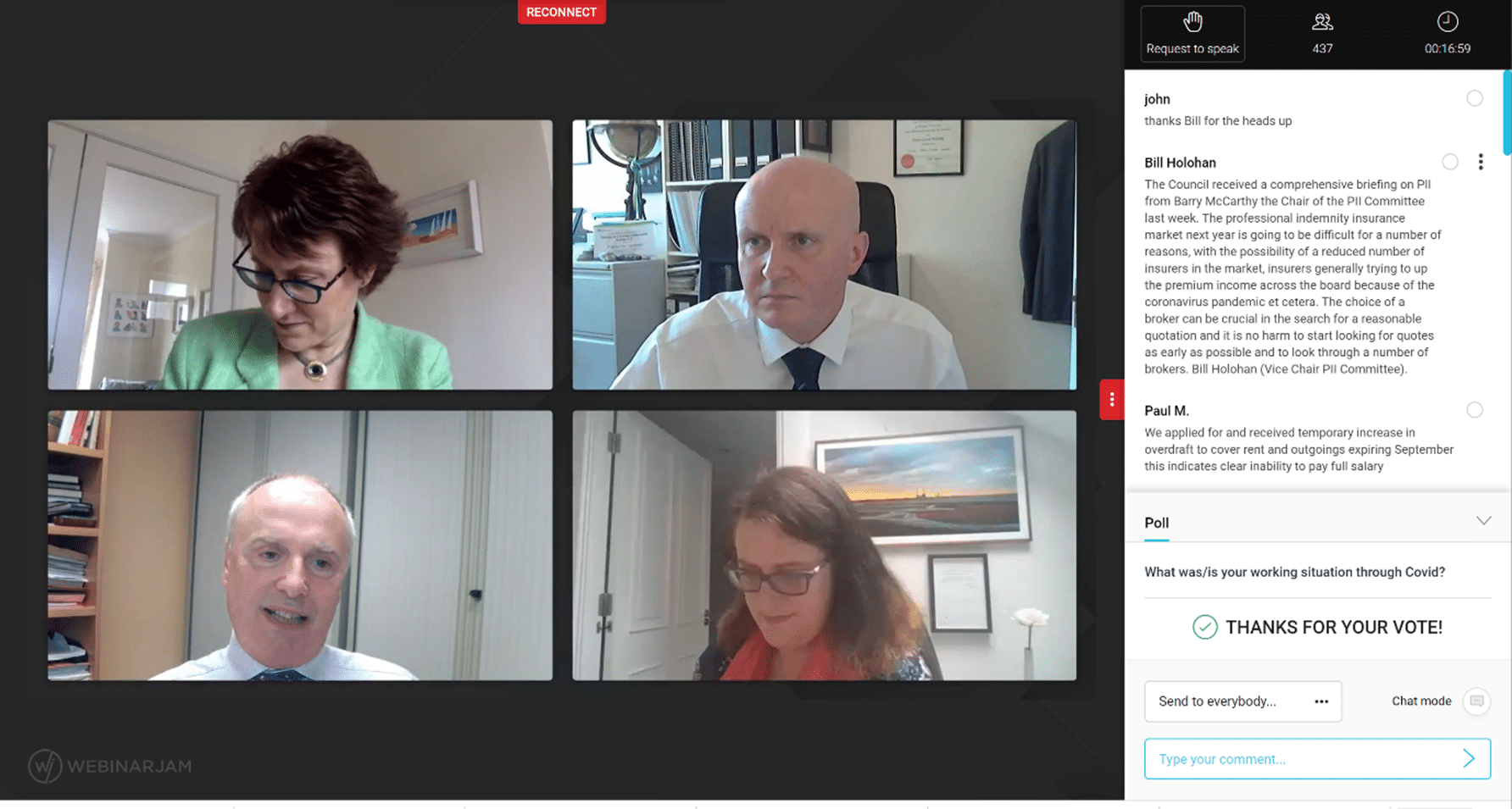 When the Covid-19 crisis first broke, a colleague of mine in Wexford, Martin Lawlor, and I had the idea to run a webinar for fellow solicitors on coping with the challenges of practising law in the crisis.

We were pretty blown away by the fact that we had over 600 solicitors register for our first webinar and almost 1,000 registered for the second. We’re on our seventh webinar now and the numbers have continued to amaze us (you can find more details on the webinars at www.florandmartin.ie if they’re of any interest).

But what has been more than pleasantly surprising is how the nature of the webinars has evolved. Originally, this was intended as a way of providing some continuing professional development to our fellow colleagues, something that as solicitors we have to do to renew our practising certificates each year.

And that’s usually pretty dry stuff to be honest…

A new social channel for solicitors

It turned out that with everyone stuck at home for such a prolonged period, the webinars actually became almost like a social outlet for many of the viewers. It was an opportunity to meet and catch up with friends and colleagues for lots of people who were stuck at home and isolated, who would usually have been out and about and interacting with a wide network of people as part of their busy practices.

And so, the craic and banter on the webinars almost became as important as the content we were sharing; the social aspect of them has become a central feature.

On our last webinar one of our guests was the great-granddaughter of the founder of the Southern Star and indeed my own grandfather, also Florence McCarthy, had written for the Star as a court reporter back in the forties. The historical co-incidences led the Star to take an interest and they did a nice piece on the webinars in this week’s paper, you can see the Star article here.

So why am I telling you all of this?

Firstly, we believe that it is important to step up and take a leadership position in the legal profession on your behalf, because we believe that that best places us to be able to represent you and advocate for your interests when you need it.

Secondly, while the Covid-19 crisis has thrown up some awful problems and really serious challenges for us all, what is important is how we react and respond to those problems and challenges.

Some things that wouldn’t have happened but for the current crisis have resulted in things getting done in new and different ways which in turn has thrown up innovations and opportunities.

And if we just go where serendipity leads us, sometimes the results can be pleasantly surprising!

P.S. The Law Society Gazette is the magazine of record of the legal profession and has been going from strength to strength in recent years. We were delighted when the excellent team at the Gazette picked up on the recent article on our webinars for solicitors in the Southern Star.  You can read the Law Society Gazette article here.

Post by Flor McCarthy
Flor McCarthy is one of Ireland’s leading lawyers, certified by the Law Society of Ireland in Data Protection Practice. Flor has extensive expertise and hands-on practical experience in privacy, data protection and GDPR issues for marketers. He was chosen as Munster Solicitor of the Year at the Irish Law Awards in 2018.
@https://twitter.com/flormccarthy
Previous Post Equality, Diversity and Inclusion
Next Post Statements of Truth Need to be a Top Priority